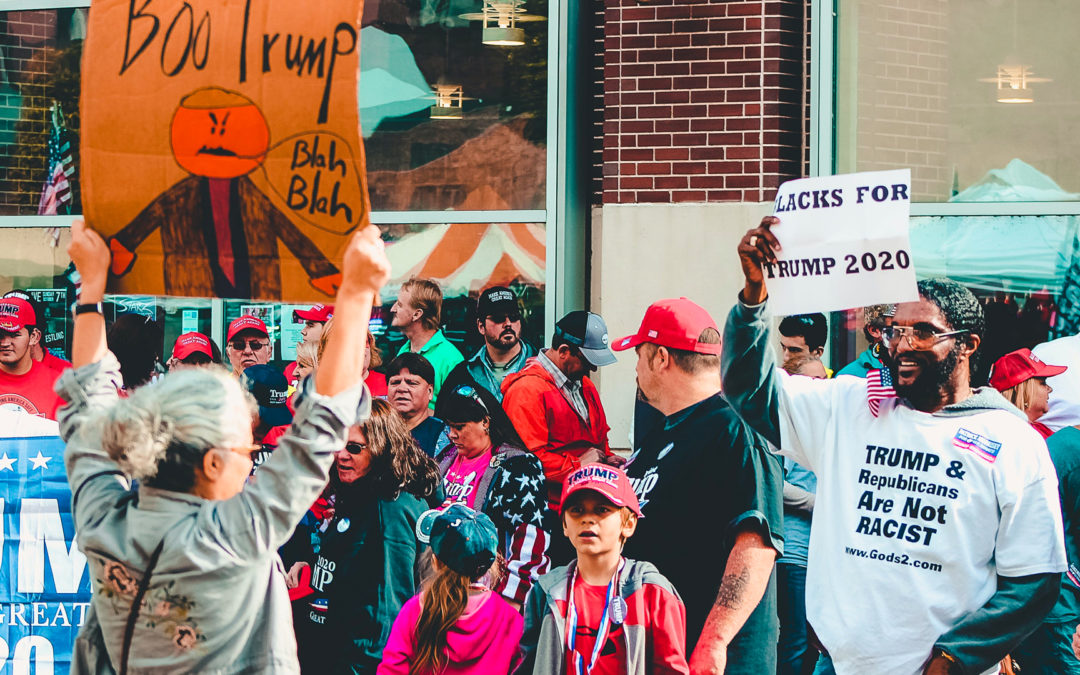 If 2020 hasn’t been chaotic enough already (pandemic, racial tension, rioting, wildfires), we have a presidential election coming up in a couple months. The political divide in our country seems to be as wide as it has ever been, even among Bible-believing Christians. Pick your issue – abortion, racism, sexism, immigration, healthcare, poverty, pandemic response, law enforcement, religious freedom, the environment, personal integrity, etc. – and neither political party seems to have a consistently biblical worldview. So, what is a follower of Jesus to do in times like this? What is a biblical approach to politics in a divided world?

I would like to recommend an approach I am calling Prophetic Politics as opposed to Partisan Politics.

Perhaps the moment Jesus spoke most clearly about the relationship between His mission and earthly politics was when he was on trial before Pontius Pilate and about to crucified. Pilate was the governor of the Roman province of Judaea and presided over Jesus’ trial. Pilate wanted to know if Jesus, the so-called “King of the Jews,” was leading a political movement:

Jesus answered, “My kingdom is not of this world. If my kingdom were of this world, my servants would have been fighting, that I might not be delivered over to the Jews. But my kingdom is not from the world.” Then Pilate said to him, “So you are a king?” Jesus answered, “You say that I am a king. For this purpose I was born and for this purpose I have come into the world—to bear witness to the truth. Everyone who is of the truth listens to my voice.” (John 18:36-37)

Following King Jesus (instead of an emperor, governor or president) and aligning with His purpose, which is being “of the truth” and “bearing witness to the truth,” is Prophetic Politics. Our kingdom is not of this world, because this world is not our home. “Out citizenship is in heaven, and from it we await a Savior, the Lord Jesus Christ” (Philippians 3:20).

So, what does this mean for how we interact with American politics?

1. Don’t put your hope for the future in any political candidate.

Regardless of who wins the election, our hope for the future is certain.

For the grace of God has appeared, bringing salvation for all people, 12 training us to renounce ungodliness and worldly passions, and to live self-controlled, upright, and godly lives in the present age, 13 waiting for our blessed hope, the appearing of the glory of our great God and Savior Jesus Christ, 14 who gave himself for us to redeem us from all lawlessness and to purify for himself a people for his own possession who are zealous for good works. (Titus 2:11-14).

If Trump wins, our hope remains certain. If Biden wins, our hope remains certain. Our hope is not in the resolution of any specific political issue in this present evil age. Our kingdom is not of this world. Instead, our BLESSED HOPE is the return of Jesus and the consummation of HIS Kingdom! Only the return of Jesus will ultimately fix what is wrong with this world; no politician or political party will ever be able to do it. While we wait for Him, we should live every day in the light of His return – renouncing sin, living godly lives and zealously doing good works in His Name, including how we speak and vote as witnesses to the truth! The truth, of course, always points to Jesus as Savior and Lord: “Jesus said…, ‘I am the way, and the truth, and the life.’” (John 14:6).

2. The sovereignty of God in appointing political leaders.

Jesus is King. He rules over every detail in the universe. Ephesians 1:11 says He “works all things according to the counsel of His will.” This includes granting political power to specific people: “He changes times and seasons; he removes kings and sets up kings…” (Daniel 2:21). Before you are tempted to think there must be exceptions to this, the Apostle Paul declares otherwise: “…there is no authority except from God, and those that exist have been instituted by God” (Romans 13:1). Daniel is equally clear: “The Most High rules the kingdom of men and gives it to whom he will…” (Daniel 4:17).

There is great mystery in how human freedom and divine sovereignty work together in this, but the truth is that God is sovereign over who rules the kingdoms of this world. Even if we all flipped a coin in deciding who to vote for, it would not remove God’s sovereignty. “The lot is cast in the lap, but its every decision is from the Lord” (Proverbs 16:33).

Throughout history, God has sometimes instituted horrible leaders to accomplish His purposes that extend far beyond the present moment. He sometimes does this to judge a people or a nation, and He sometimes does it bring about an even greater good. Either way, He tells us: “I am God, and there is no other; I am God, and there is none like me, declaring the end from the beginning and from ancient times things not yet done, saying, ‘My counsel shall stand, and I will accomplish all my purpose,’ calling a bird of prey from the east, the man of my counsel from a far country. I have spoken, and I will bring it to pass; I have purposed, and I will do it” (Isaiah 46:9-11).

We are called to be people “of the truth.” Jesus said, “Everyone who is of the truth listens to my voice” (John 18:37). Bearing witness to the truth means listening to Jesus’ voice and reporting what we hear in a way that points people to Him. HE is the truth (John 14:6). This is the prophetic aspect of Prophetic Politics. Rather than embracing the platform of any specific political party, we should hear, embrace and report the voice of our Savior and King about any given political issue (regardless of whether it leans Democrat, Republican or Independent). The goal is always to point people to HIM!

In Prophetic Politics, the “how” matters as much as the “what.” We need to “speak the truth in love” (Ephesians 4:15) and “to be ready for every good work, to speak evil of no one, to avoid quarreling, to be gentle, and to show perfect courtesy toward all people” (Titus 3:1-2).

During this election season, let’s not lose sight of our purpose as followers of Jesus. Our kingdom is not of this world. Our citizenship is in heaven, which means our politics are different from the politics of this world. The goal of our politics is prophetic. It is to be Jesus’ witnesses and point people to Him while we wait for Him to return.

“Our Father in heaven, hallowed be your name, your kingdom come, your will be done, on earth as it is in heaven.” (Matthew 6:9-10)

[1] For further reading, see Wayne Grudem’s “Politics According to the Bible.”